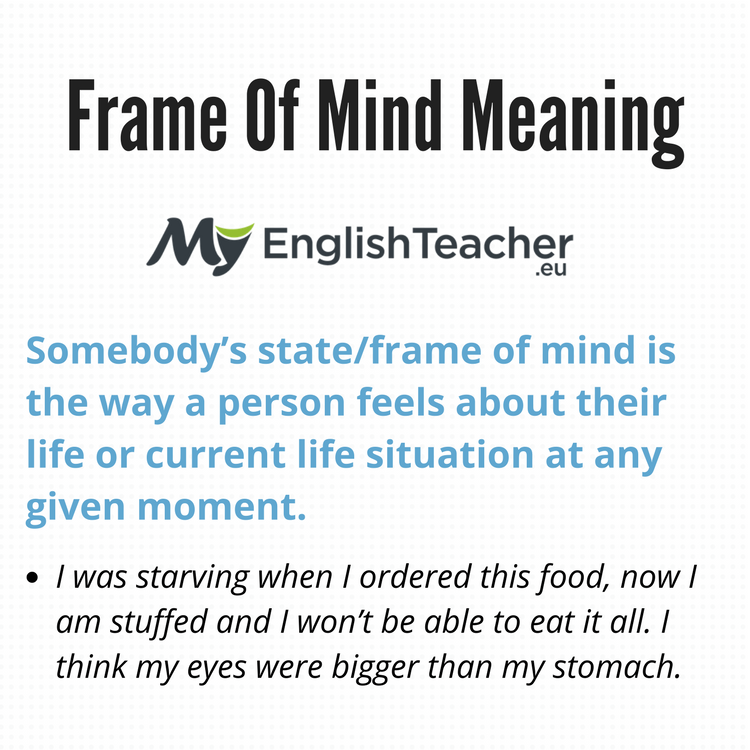 As a verb, it can mean to put something in a frame like a picture.  The word mindin the context is used as a noun. The word mindrefers to a person’s awareness of the world, their experiences, how they think feel and behave. It also includes a person’s intelligence, judgment and reasoning.

Somebody’s state/frame of mind is the way a person feels about their life or current life situation at any given moment.

Example of “Frame of mind”.

Abraham: Hey mate, how was your date?

David: Yeah, it was strange she seems perfect for me but I just couldn’t connect.

Abraham: What do you mean you couldn’t connect?

David: Well, we just didn’t seem to share the same frame of mind.

David: That is an interesting question, I think it was my frame of mind. I don’t think I am in the frame of mind to date after my divorce.

What until she is in a better frame of mind to ask her.

He has a cheerful frame of mind.

She has had a real somber frame of mind since she spoke with the CEO.

Cheer up- for someone to become happy from a sad state of mind.

Lash Out at- in the context of frame of mind this would refer to someone who says or does something out of anger towards someone to a group of people.

Lighten up- when we use the phrase lighten up we are saying that someone becomes happier and in a better mood.

Grow on (Someone)- we use this term to describe the idea someone slowly begins to like someone, usually someone you didn’t like at first or in the past.

Fed up- when are frustrated with someone or something and you have not more patience.

Feel myself- when you are in a normal mood.

Up and down- when a person’s mood fluctuateserratically for no real reason.

Be in one of your moods- this is an idiom to describe a person who might be being unfriendly or upset and is a regular mood for them periodically.

Down in the dumps- this is a phrase used to describe someone who is sad or in a depressed mood.

Pleased a punched- we use this phrase to describe someone who is in a good mood and happy about something or someone.

Make my day- when some uses this phrase they are saying someone or something occurred that made their day better.

Bummed out- when someone is feeling sad, upset or disappointed about something or someone.

Had my fill of- this is a phrase we use to say that someone’s patience is at an end and they have no more tolerance for someone or something.

On the top of the world- when someone is feeling extremely happy or elated about something.