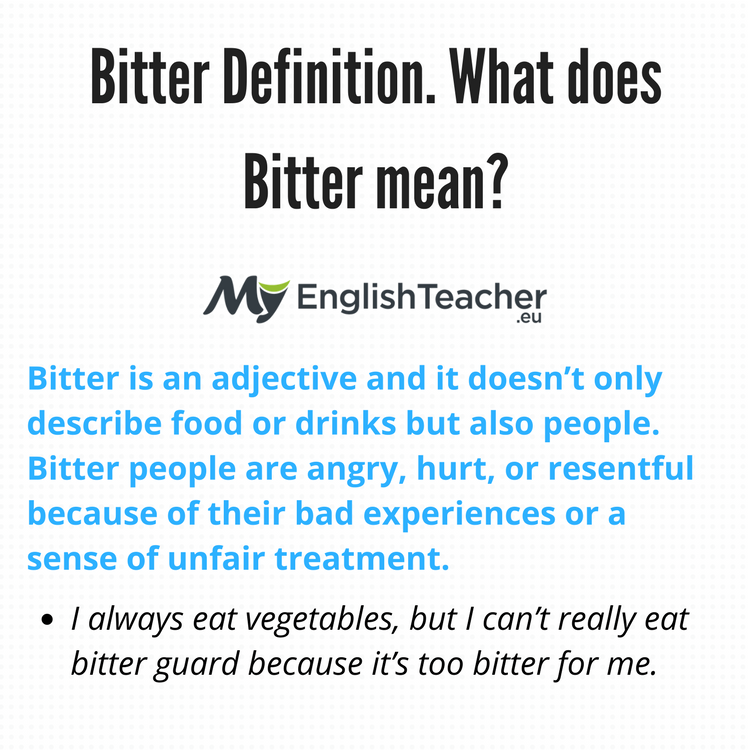 Have you tasted bitter beer or bitter food? Humans may taste at least 5 flavors such as sweet, sour, bitter, salty and umami. Bitter foods have a sharp, pungent taste or smell. They can be toxic or have beneficial effects on health.

Bitter is an adjective and it doesn’t only describe food or drinks but also people. Bitter people are angry, hurt, or resentful because of their bad experiences or a sense of unfair treatment. Have a look at the following examples:

For British people, bitter is a style of pale ale beer that varies in color from gold to dark amber and its strength is 3% to 7% alcohol. There are different types of bitter beer according to their alcohol content such as light ale, session or ordinary, best or special, premium or strong and golden ale.

Rhea: Hi Lyn, do you have plans for the weekend? We are planning to throw a surprise party for Ronald. It’s his 30th birthday.

Lyn: I would love to come to the party, but are you inviting Carlos? I don’t want to see him.

Rhea: I think he’ll be there. I thought you are not bitter of his promotion. I heard you will also get promoted soon.

Lyn: I didn’t feel bitter when I knew he got the promotion. It’s just that I think he made me bitter when he kept teasing me that I was overly serious, so I can’t be the manager of our department.

Rhea: I understand how you feel. Carlos can be a real jerk sometimes. But, you can come to the party and show him that you didn’t remain bitter, and you are perfectly OK with it.

Feel miserable about: to feel very sad about something.

Frown at: to disapprove of something.

Rail against: to complain about something by speaking openly and loudly about it.

Show antipathy towards: to show a strong feeling of dislike or hostility towards someone of something.

Come out against: to defy laws or rules; to resist something or someone.

Object to: to disapprove someone or something.

Look askance at: to regard something in a disapproving or distrustful manner.

till/until/to the bitter end: this is used to refer to the completion or conclusion of something, even though it may be difficult, unpleasant, or take a long time to reach.

a bitter pill (to swallow): this refers to an unwanted or unpleasant situation that someone must accept.

the bitter fruits: this refers to the negative results or consequences of something.

Shed bitter tears: to mourn or lament for something.