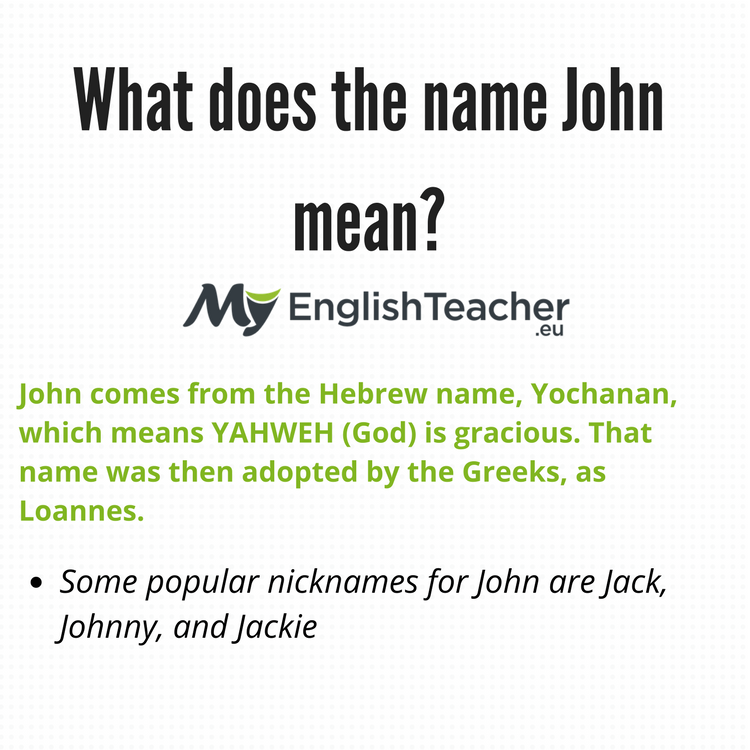 Origin of the name John

John comes from the Hebrew name, Yochanan, which means YAHWEH (God) is gracious. That name was then adopted by the Greeks, as Loannes. That name became what was later translated into Latin, and its English form is Lohannes.

The Hebrew form of the name John is first found in the Old Testament, which is spelled Johanan or Jehohanan in the English version of the Bible and Hebrew scriptures.

However it is two figures in the New Testament that are the reason the name John has become so popular. The first is John, The Baptist, who baptised Jesus. The second being John, one of the Apostles. He is thought to be the author of the fourth Gospel and Revelations.

From there it spread to English speaking countries. John was the most popular Christian name from the time of the first crusade until the 1950s.

Rulers of almost every major Western civilization have bore the name. When John is translated into English it means the grace or mercy of the Lord.

While John’s popularity may be at or near its lowest, it is still a very popular name around the world. It is most popular in Ireland, the United States, Germany, Scotland, New Zealand, Sweden, and England.

John in Other languages

In French John takes on the form Jean. In Scottish it is Sean, and Ian in Irish. In Welsh, John comes in the form of Ewan or Evan, and it’s Giovanni in Italian. In Spanish it’s Juan, and in German it is Johannes and Johann. In Slavic it takes the form of Jan, and in Russian it’s Ivan.

Some popular nicknames for John are Jack, Johnny, and Jackie.

However there is also another theory, being the nickname came from a Norman tradition of adding “kin” to a name if they want to say “little” or “miniature”, so Jack would be little John. The Normans would say John. So little John would be Jenkin and that later turned into Jackin, and then was finally shortened to Jack.