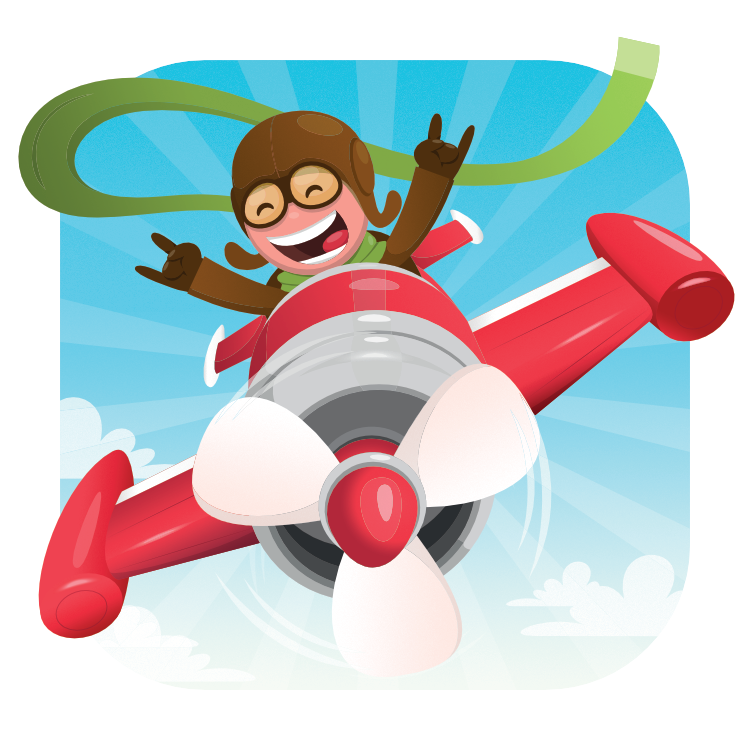 Aviation can affect our lives in many different ways!

For some of us, seeing an aeroplane means that we are off on holiday or vacation. This can be exciting but also a little stressful to organise!

For others, maybe it means work. If you are a pilot and you sit inside a plane everyday it’s just another day for you and perhaps not as thrilling!

Whatever the case, there are so many words associated with the process of flying. We’ve compiled some of the most common terms below with useful definitions, examples and dialogues so that you can fly with confidence in your English.

The words we have for you are:

Airport:
This is the place where planes takeoff and land.

Shirley: Oh, I love the airport!

Shirley: What do you mean? It’s wonderful! There are shops, there’s great food and there are so many interesting people around us!

Tim: I hate it. There are too many people, there is never anywhere to sit and you have to line up if you want to do anything. It’s too stressful.

Flight:
The process of flying.

Graham: Ivan, you have to be there early, 3 hours before your flight, and it takes an hour to get to the airport!
Ivan: Oh no! We better get going or I’m going to miss my flight!

Layover:
When you have to wait somewhere on the way to a final destination.

Sarah: Hey, Joe how are you?
Joe: Oh hi Sarah, thanks for calling, I’m actually in Dubai right now!

Sarah: Really? What on earth are you doing there?
Joe: I’m here on a 24-hour layover. I’m on my way to Singapore but we had to stop here on the way to refuel.

Sarah: Oh, that sucks. I hate layovers.
Joe: No, it’s okay. It gives me the chance to have a sleep and take a shower before we carry on.

Takeoff:
When the plane leaves the ground and begins to fly.

Landing:
The process of a plane coming back down to the ground.

Dave: Maurice, wake up! The pilot said that we will be making our landing shortly.

Maurice: Finally! I’m ready to get off this plane!

Dave: I know me too, the sooner we land, the better!

Boarding:
When people get onto a plane.

Priya: Tony, did you hear that? It’s time for boarding!

Tony: Yes, but we should stay sat down.

Tony: Because we are in boarding group 3. First they have to board priority boarders like families and people who paid to get on the plane first. Then they will board group 2 and then finally it will be us!

Priya: I didn’t think about that! We should stay sat down for sure!

More for you:
››› Travel, Holiday, Vacation Vocabulary and Dialogs in English
››› Difference between LUGGAGE and BAGGAGE
››› 397 Travel Words to Speak Freely while Travelling and Feel

Pilot:
The person that drives the plane.

Hamish: What on earth are we waiting for?
Gerald: Well I think the pilot has to do a few checks before we fly.

Hamish: Oh I get it. I suppose he is a pilot after all! He will know what he’s doing better than me.
Gerald: I should think so! Pilots have to train for a long time before they are allowed to fly commercial planes.

Hamish: That makes sense. When we are up in the air, the pilot is responsible for all of us!
Gerald: Exactly! It’s a lot of responsibility.

Altitude:
How high in the air something is.

Finley: Wow! Greta look how high we are!
Greta: Oh yeah, the screen says we are thousands of feet up in the air. Isn’t it amazing?

Finley: I learned at school that they call that altitude.
Greta: Yes, they do!

Finley: What an experience to be able to be this high up in the air and see absolutely everything!
Greta: Absolutely, we live in amazing times.

Propeller:
Mechanisms that spin to allow the plane to fly.

Dina: Agatha, what is that spinning thing by the plane’s wing?
Agatha: I think that’s called a propeller. It helps the aircraft to fly.

Dina: Ah yes I was trying to remember the name! They have huge ones on helicopters.
Agatha: I think the aeroplane ones are pretty big too! They have to be very powerful to carry us all through the air.

Dina: That’s right. At least they aren’t made out of wood anymore like in the olden days.
Agatha: Agreed, I would be too scared to fly!

Runway:
The area where planes take off and land.

Will: Wow, that’s a long road that the plane goes down. Look how fast it’s going.
Tina: That’s called the runway, Will, it’s so the plane has enough time to gather speed before takeoff.

Will: Ah yes, the runway. The one with all the lights around it.
Tina: That’s so the pilots can see the runway when they land. It’s an important part of any flight!

Streamlined:
When a plane is adapted to fly with speed through the air.

Barry: Aeroplanes these days look so sleek and advanced, don’t you think Martin?

Martin: I was just thinking the same thing, Barry! They look so smooth. I think it’s because they’re streamlined.

Barry: Oh yeah, I saw something about that on television. That makes them faster and more efficient when they fly.

Martin: Yes, that’s right. It’s big business for companies that want to streamline their planes to make their flights cheaper!

Taxi:
The time taken for the aeroplane to drive from the airport to the runway.

Pilot: Good afternoon everyone, I would like to welcome you to this flight today, we will be taking off shortly and before that we will taxi onto the runway.

Joe: Taxi?! I’m taking an aeroplane to Spain not a taxi.

Felicity: No, Joe, you fool! Taxiing is when the plane drives from the terminal to the runway!

Joe: Ah, that’s a relief. I was thinking that wouldn’t be a very good trip!

Velocity:
A technical term for speed.

Dan: Wow, Ryan, we are going so fast!
Ryan: I know! On the screen it says our velocity is at hundreds of miles per hour!

Dan: Can you imagine if we were going that fast on the ground?
Ryan: It’s mind-blowing! But I don’t know whether that velocity would be safe on the ground!

Visibility:
How well something can be seen.

Heidi: Jake, have you heard? The flight has been delayed.
Jake: Oh no! Why?

Heidi: Well they have said that it is due to poor visibility.
Jake: I suppose it is very cloudy and foggy out there.

Heidi: Yeah but I want to go! Do we really not have technology that can deal with visibility issues?
Jake: I suppose not. Be patient, I’m sure we will be on our way soon!

Turbulence:
Pockets of air that make a flight bumpy and uncomfortable.

Ria: Don’t worry Tessa, it’s just like going over a bumpy road. The pilot just said that it’s not serious.
Tessa: I know, but it’s more scary in the air. I’m always worried that turbulence is going to make the plane crash.

Ria: Don’t be silly! You don’t need to worry. Statistically you are much safer with air travel than you are driving a car!
Tessa: I don’t like driving a car either and you don’t get turbulence!

Wings:
The mechanisms on the side of the airplane that allow it to fly.

Kyle: Oh, Regan, look! We have seats right next to the wing!
Regan: Yeah, so what?

Kyle: I love watching the wings while we fly, it’s really interesting to watch the different parts and how they work during a flight!
Regan: Maybe for you! I prefer watching the movies and shows on my screen!

Landing gear:
The equipment that allows the plane to come back to the ground.

Pilot: We do apologise for this delay everyone, but we have to fix the problem before takeoff.
Fiona: What? Why are we delayed now?

Bruce: Didn’t you hear? There was a slight problem with the landing gear, but they said they are going to fix it soon.
Fiona: Okay, well I suppose they have to fix it! Otherwise we would be stuck in the air forever!

Cockpit:
The are of the airplane with the controls for the aircraft. This is where the pilot and the copilot sit.

James: Christian, is it true your dad is a pilot?
Christian: Yeah it’s true, why?

James: I want to be a pilot one day and I was wondering if I could go and see what a real-life cockpit looks like.
Christian: I’m sure that wouldn’t be a problem, he’s shown me the cockpit before.

James: Really? What’s it like?
Christian: It’s so cool! There are lights everywhere and so many buttons. There’s also a lot more space than you would expect.

James: Oh I can’t wait to see one!

Navigation:
The process of finding the right direction.

Faye: Brian, what’s that on your screen? Is that a film?
Brian: No! It’s the navigation screen, you can see where the plane is going and how far away we are!

Faye: Cool! So do you think this is the navigation screen that the pilot sees?
Brian: I think his screen might be a little more complicated, but I might be wrong!

Now you are ready for takeoff with all of this fantastic aviation vocabulary. You can talk to pilots everywhere or even help your friends on an English-speaking airline.

Please leave any questions or comments below!