Do you ever wonder which idiom you could use to compliment or criticise someone’s actions?
Here is an action-packed collection of idiomatic expressions related to sports and just being active in general.
Go ahead, pull out all the stops and start using them today!

PULL OUT ALL THE STOPS
Used when someone does everything they can possibly do to achieve the result they want.

ON THE BALL
To know what is happening. To be fully aware and in control of a situation.

[Tweet “ON THE BALL: To know what is happening. To be fully aware and in control of a situation.”]

KEEP ONE’S EYE ON THE BALL
To remain alert and keep one’s attention focused on the task or matter at hand.

DROP THE BALL
Make a mistake, disappoint everyone.

JUMP FOR JOY
To jump up because one is happy.

ALL HANDS ON DECK
Used to indicate that the involvement of all the members of a team is required.

THE BALL IS IN ONE’S COURT
Used to express when it is someone else’s decision to do something.

CALL THE SHOTS
Make all the important decisions.

FRONT RUNNER
The person expected to win or succeed.

[Tweet “FRONT RUNNER: The person expected to win or succeed.”]

GET INTO THE FULL SWING
Get comfortable after doing something for a while.

IN FULL SWING
At the peak of an activity, moving fast and efficiently.

GET OFF THE HOOK
Escape, have responsibility removed.

JUMP OFF THE PAGE
Something that is visually pleasing or someone who is intellectually sharp, and stands out above the rest.

GET A SECOND WIND
Have a sudden burst of energy after being tired.

GIVE (SOMETHING) ONE’S BEST SHOT
To try your absolute hardest to succeed.

[Tweet “GIVE (SOMETHING) ONE’S BEST SHOT: To try your absolute hardest to succeed.”]

PLAIN SAILING
A straightforward or simple task that has no problems, and is very easy to complete.

IN A LEAGUE OF ONE’S OWN
Someone who is much better than the rest.

JUMP OFF THE DEEP END
To take immediate and drastic action.

JUMP THROUGH HOOPS
To go to extreme lengths to get something done, or to please someone.

TO JUMP OUT OF ONE’S SKIN
To be badly frightened.

JUMP AT SOMETHING (A CHANCE OR OPPORTUNITY)
To seize the opportunity to do something.

JUMP TO CONCLUSIONS
To make an assumption without considering all the facts.

[Tweet “JUMP TO CONCLUSIONS: To make an assumption without considering all the facts.”]

HIT IT OUT OF THE PARK
To have enormous success.

STAY AHEAD OF THE GAME
To be leaders in a particular field/business environment.

A TWO HORSE RACE / NECK AND NECK
A close contest between two groups/companies.

APPROACHING THE FINISH LINE / THE HOME STRETCH
Getting quite close to the end.

JUMP OFF THE SHELVES
To sell really well, a popular product.

JUMP / GET ON THE BANDWAGON
To join a cause, follow or copy a popular trend or activity.

GIVE (SOMEONE) A RUN FOR THEIR MONEY
To make it really hard for someone else to succeed over one’s self.

ACROSS THE BOARD
Equal for everyone. Applying to everybody or everything.

AT THIS STAGE IN THE GAME
At the present moment or time during an activity.

HIT BELOW THE BELT
Do or say something that is very unfair or cruel.

[Tweet “HIT BELOW THE BELT: Do or say something that is very unfair or cruel.”]

GO OVERBOARD
Do or say too much, more than is necessary.

JUMP DOWN (SOMEONE’S) THROAT
To criticise or become angry with someone.

HOT SHOT
Used to describe someone who thinks they are the best. This could also be used in a positive way to compliment someone who is very skilful.

JUMP AT ONE’S OWN SHADOW
When someone is afraid of everything around them.

OFF AND RUNNING / OFF TO A RUNNING START / OFF TO A FLYING START
Start something with a good, smooth beginning and progressing well.

KEEP ONE’S HEAD ABOVE WATER
Trying not to fall behind in work, other duties or financially.

LONG SHOT
Something that may be difficult to accomplish, but is attempted anyway.

NO SWEAT
Another way of saying ‘Not a problem’.

MAKE THE CUT
Be chosen to be part of a group or team.

OUT OF ONE’S LEAGUE
Not as good as another.

JUMP THE SHARK
A term used to describe a moment when something that was once great has reached a point where it will now decline in quality and popularity.

RACE AGAINST TIME
When there is almost no time left to accomplish something.

TAKE THE BULL BY THE HORNS
Accept a challenge and do your best to succeed, or deal with a problem directly.

WALKING / SKATING ON THIN ICE
To do something that is very risky. To put one’s self in a situation that could become quite problematic or dangerous.

GET / START THE BALL ROLLING
To begin something.

KEEP THE BALL ROLLING
To maintain the momentum of an activity.

WIN HANDS DOWN / BEAT (SOMEONE) HANDS DOWN
An easy victory.

THROW IN THE TOWEL
To give up on something.

BAT A THOUSAND
To be successful in everything that you do.

JUMP SHIP
To leave or abandon something that is not doing well.

BOUNCE (SOMETHING) OFF (SOMEONE)
To test someone’s reaction to an idea, in order to get their opinion about it.

CLEAR A HURDLE
To overcome an obstacle.

DIVE IN HEADFIRST
To do something impulsively, without thinking about the consequences.

[Tweet “DIVE IN HEADFIRST: To do something impulsively, without thinking about the consequences.”]

A FIGHTING CHANCE
A good possibility of succeeding if you try hard.

DIVE RIGHT INTO (SOMETHING)
To begin to do something without hesitating, getting started immediately.

KICK OFF (SOMETHING) or KICK (SOMEONE) OFF
To begin something, to start something.

SET THE PACE
To establish the pace or speed of something.

SINK OR SWIM
To fail or succeed by one’s own efforts.

JUMP THE GUN
To be impatient and not wait for the right time. To do something too soon, especially without thinking about it carefully.

WILD CARD
Something or someone that adds an unexpected twist to an activity or situation.

TACKLE A PROBLEM
To attack a problem with a lot of effort, in order to resolve it.

TEAM PLAYER
Someone who works well with others to achieve a common goal.

[Tweet “TEAM PLAYER: Someone who works well with others to achieve a common goal.”]

TO THROW IN A CURVEBALL
To surprise someone by doing something unexpected.

TOUCH BASE WITH (SOMEONE)
To briefly meet or make contact with someone, usually to update them or be updated on a matter. 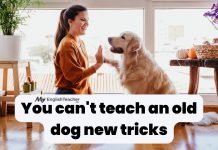 “Jump the shark” isn’t a sports idiom — there’s no event that requires a participant to jump over a shark, and the presence of the verb “jump” doesn’t automatically render this a sports idiom. If you want to help people learn English, then delete this phrase — implying that it refers to a sporting event will only confuse them. (The phrase resulted from a TV show, “Happy Days,” that was in decline; in an effort to boost ratings, writers had one of its characters attempt this stunt.)

Or, you could retitle this post to make the inclusion of “jump the shark” make sense — you could find a concise or even clever way of saying that these idioms involve a verb that denotes vigorous activity. But please don’t confuse people who aren’t yet fluent.

Thanks for your opinion DW. But we still believe it’s a great idiom to mention in this list!