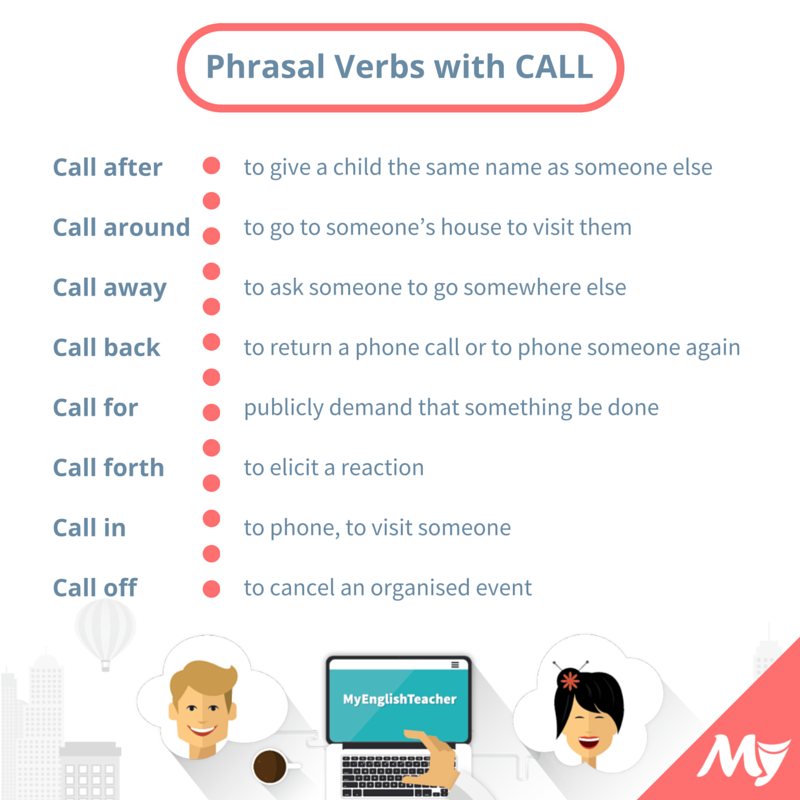 1. Call after
To give a child the same name as someone else, especially a family member

2. Call around / Call round
To go to someone’s house to visit them

3. Call away
To ask someone to go somewhere else

4. Call back
To return a phone call or to phone someone again

To return to a place

5. Call for
Publicly demand that something be done

To require or make necessary

To go somewhere to pick someone or something up

Recommended for you:
Phone Conversation: Most Commonly Used English Phrases
Phrasal Verbs with BE!

6. Call forth
To elicit a reaction

To ask a person, especially an expert, to come to do something

To ask someone to enter a room

8. Call off
To cancel an organised event

To stop doing an activity

9. Call on
To visit someone

To demand or request that someone do something

To use a quality, usually something that requires a great effort, in order to achieve something

To ask for an answer or response

10. Call up
To phone somebody

Select someone to play on a team

To summon for military service, especially during a war

To make you remember or recall something

To make information in a computer appear on screen

Recommended for you:
7 Simple Examples of Business Email Writing in English
Phrasal Verbs with HEAR

11. Call out
Order or request help from someone

12. Call round
To visit someone

13. Call at
Stop at a harbour, port or station

14. Call by
To visit somewhere briefly whilst on your way to somewhere else.

15. Call down
To find fault with; reprimand

Recommended for you:
List of Sentence Connectors in English with Examples!
Useful English Phrases For Running A Business Meeting